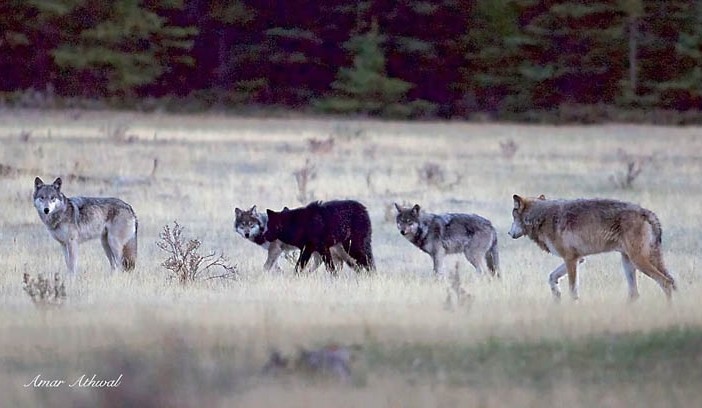 A Visit From The Wolf Pack

Here in Banff National Park, we live side by side with our wild neighbours. The unique location of the Juniper means we get more four legged visitors than most downtown hotels. It’s common to see deer grazing on the grassy verge outside the bistro and the occasional bear has been known to pass by on the way to the next berry bush. But wolves are an extremely rare sighting in this area. So it was a real thrill when staff and guests spotted a wolf pack at the edge of the property last week. For the safety of humans and the animals, it was important to give the pack plenty of space, but one of our guests did manage to capture some images of one of the wolves by the side of the Juniper access road.

Wolves get a bad rap in popular culture: our childhood stories are full of big bad wolves eating innocent grandmothers and blowing houses down for a taste of bacon. But these apex predators play an important role in the ecosystem; conservation scientists refer to them as a keystone species. They help regulate the local elk and deer population, which has a trickle-down effect on plant life further down the food chain, and other small animals that rely on the same food sources.

For species like wolves to thrive, it’s important that they are able to travel safely through the landscape. Cutting edge conservation science is focusing on creating wildlife corridors that connect protected areas like provincial and national parks. The Mt. Norquay wildlife corridor runs just next to the Juniper and is part of a larger connected network that stretches from Yellowstone National Park in the US all the way to the Yukon. Highway fencing and special wildlife crossing structures are also in place throughout Banff National Park and have dramatically reduced the amount of wildlife collisions and deaths on this section of the Trans-Canada.

Despite our best efforts, in the 21st century, it’s clear that humans are a far bigger threat to wolves than the other way around.  In 2016, the Bow Valley pack lost six cubs and two adults in a single year and was thought to be near collapse. The cubs were victims of car and train collisions; tragically, another wolf pup was killed on the highway just this month. The adult wolves faced another common threat to wildlife: human food. If food sources are left out where wild animals can access them, the animals quickly become conditioned and will keep returning to human use areas. This can lead to dangerous interactions with people, and unfortunately repeat offenders like the Bow Valley wolves have to be put down. To add to the pressure on the pack, wolves are not considered a threatened species in Alberta and can be freely trapped. This has lead Y2Y chief scientist Jodi Hilty to call for a buffer zone around protected areas like the national park to protect wolves that might wander outside the boundaries

It’s an amazing opportunity to be this close to beautiful animals like wolves. But it also comes with a lot of responsibility. We always need to keep our eyes and ears open and be aware of animal activity in the area. We also need to keep any attractants, particularly food and food waste, safely locked away. While we were really pleased to see the wolf pack, we hope they are staying safe out there as they travel close to human use areas. The pack currently consists of one adult male and one female, plus three cubs that are almost a year old. Parks Canada staff are hopeful that the adult wolves have bred this season and the pack might be welcoming new cubs this spring. If we all practice wildlife safety and support ongoing protection and conservation efforts, we hope we’ll see our local wolf packs grow in strength in the coming years. To stay up to date with wildlife sightings here at the Juniper, and see video footage of the wolf pack, check out our Facebook and Instagram.

Other Images courtesy of Slobodan Rancic

This is your year - get outside and embrace it! Save up to 25% on the winter wonderland of Banff. Experience Snow Days from Jan 18th - 29th or design your own adventure on skis, skates or snowshoes.

Get 25% Off January & February trips with code SNOW25.

Book by February 1st 2023 to save on stays before February 16th 2023. Blackout dates and 72 hour cancellation policy applies. Limited availability, cannot be combined with any other offer.

Savvy seniors 65+ can save 15% off our Best Available Rate! Book direct with us using code SEN22 and be ready to provide your ID at check-in (because you know you look younger than your years!)

Valid for stays until February 16th, 2023. Proof of age is required at check-in: blackout dates may apply.